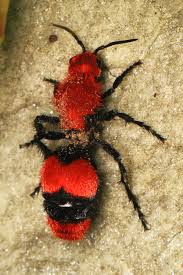 An extremely rare velvet ant – which is actually a solitary wasp said to have one of the most painful stings on the planet – has been sighted in Liverpool, England.

Although the velvet ant’s sting does not carry venom, the sting is so fierce that the insect has earned the nickname ‘Cow Killer’.

Its body is covered in strikingly coloured fur – including bright red – which is nature’s way of saying: ‘I wouldn’t come anywhere near me if I were you.’

If threatened, the Velvet Ant is said to admit a ‘go away’ squeaking warning sound, made by moving different sections of its abdomen against each other, as well as a strange smell.

Its exoskeleton is so tough that they are difficult to crush and often escape the jaws of much bugger predators like birds.

A member of the Mutillidae family of wasps, the ‘velvet ant’ is so rare in the UK that it’s believed there have only three sightings since 2013.

As with all wasps, it’s only the female who carries the weaponry, a gruesome inch-long stinger. Once mated, the female usually digs into a bee or wasp nest at ground level to lay here eggs inside existing larvae. They newly hatched velvet ant babies then feast on the larvae from the inside – nice!

Gareth Purnell of Guardian Wasp and Bee Management said: “The velvet ant is a wasp with a ferocious reputation and sting. They couldn’t down a cow in reality but there are videos online that show you all you need to know about why you would never want to get stung by one.”

VIDEO: Man gets stung be velvet ant ‘in the name of science’
https://www.youtube.com/watch?v=EF-oSVCCqzU

← Integrated Wasp Management For Food Service Businesses
Active wasp nest in January … there is an explanation! →