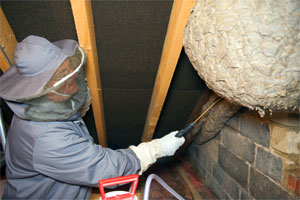 A giant nest built by up to 10,000 stinging wasps have been discovered in an abandoned loft space.

The nest was allowed to reach close to its maximum size because the property in question, in the sleepy country village of Pipewell in Northamptonshire, has been unoccupied for several years.

The nest is rare not only because of its size, but because the wasps built an intricate tunnel from the nest to the outside, which is perfectly preserved.
It was discovered by pest controllers treating an established woodworm problem prior to the new owners moving in.

Pest controller Gary Wilkinson of North London based Pest Professionals, who found the nest, said: “It’s an impressive wasp nest alright – much bigger than a barrel. Normally we get called in at the first sign of wasps causing a problem to people. This community has been allowed to go about its business undisturbed for a whole summer season. Although you wouldn’t want it in your own loft, you have to say it’s a very impressive and in its own way a very beautiful thing.”

Carcasses of hundreds of dead wasps found next to the nest indicate that the colony was created by the common wasp (Vespula Vulgaris). However people in the UK have been asked to be on the lookout for the larger Asian Giant Hornet which has been heading north across Europe. The Asian Hornet is even more aggressive than the common wasp, has a darker thorax and its stings have caused a number of deaths in countries as near to the UK as France through anaphylactic shock. Anyone who thinks they have seen an Asian Hornet is asked to report the sighting to the Bee Keepers Association.

Natalie Bungay, British Pest Control Association’s Technical Officer said: “A number of BPCA members are acknowledging the perceived increase in wasp activity this year. The Association has seen its wasp referrals rise from 6565 in 2015 to 7253 in 2016, between the months of May and August. What’s more, BPCA members are also identifying an increase and extension of the wasp season through the Association’s social media channels (#waspwatch).”

A spokesman for the British Natural History Museum commented: “Sometimes wasps just build on surfaces around the nest like this. There was a great example doing the rounds a few years ago, of a wasp nest that consumed a wooden statue. The ‘tunnel’ won’t be used for rearing young. I doubt it will be used as an entrance/exit either but it might conceivably be an extension of the original entrance hole.

Colin Campbell, who is the insect infestation specialist for Pest Professionals, said: “Although not the most loved of our flying insects by a long chalk, for obvious reasons, wasps are fascinating creatures. The nest is built around a single queen and really big nests like this can readily number 6,000 to 10,000 individuals. This one would certainly have been on the higher side of those numbers.

“They grow through a complex symbiosis between the worker wasps, which bring food to the grubs produced by the queen, and the grubs themselves, which secrete a sugary substance on which the workers feed. One is dependent on the other.

“It’s when the queen stops producing the grubs, usually in the late summer, the workers become a real pest. With no sugar being produced by the nest, the workers go out in search of their own sugar – ice creams, sugary drinks, beer and the like.

“The workers die as winter sets in and only the queen wasps survive the winter. In fact we all need to be thankful to spiders, which predate around 95 per cent of hibernating queen wasps over the colder months. Without spiders there would be a plague of wasps every year!”

Wasp Facts
Only queen wasps survive the winter, and it’s thought that over 90 per cent of them are predated while hibernating by spiders – so the message is, ‘love spiders’!

Wasps prefer sharp seasons so that the queens know when to come out of hibernation. Mild, wet winters confuse them into emerging too soon and before there is enough nectar about to survive.

When wasps find a food source they convey the location to the whole colony a complex ‘dance’. The workers then visit it until it’s exhausted.