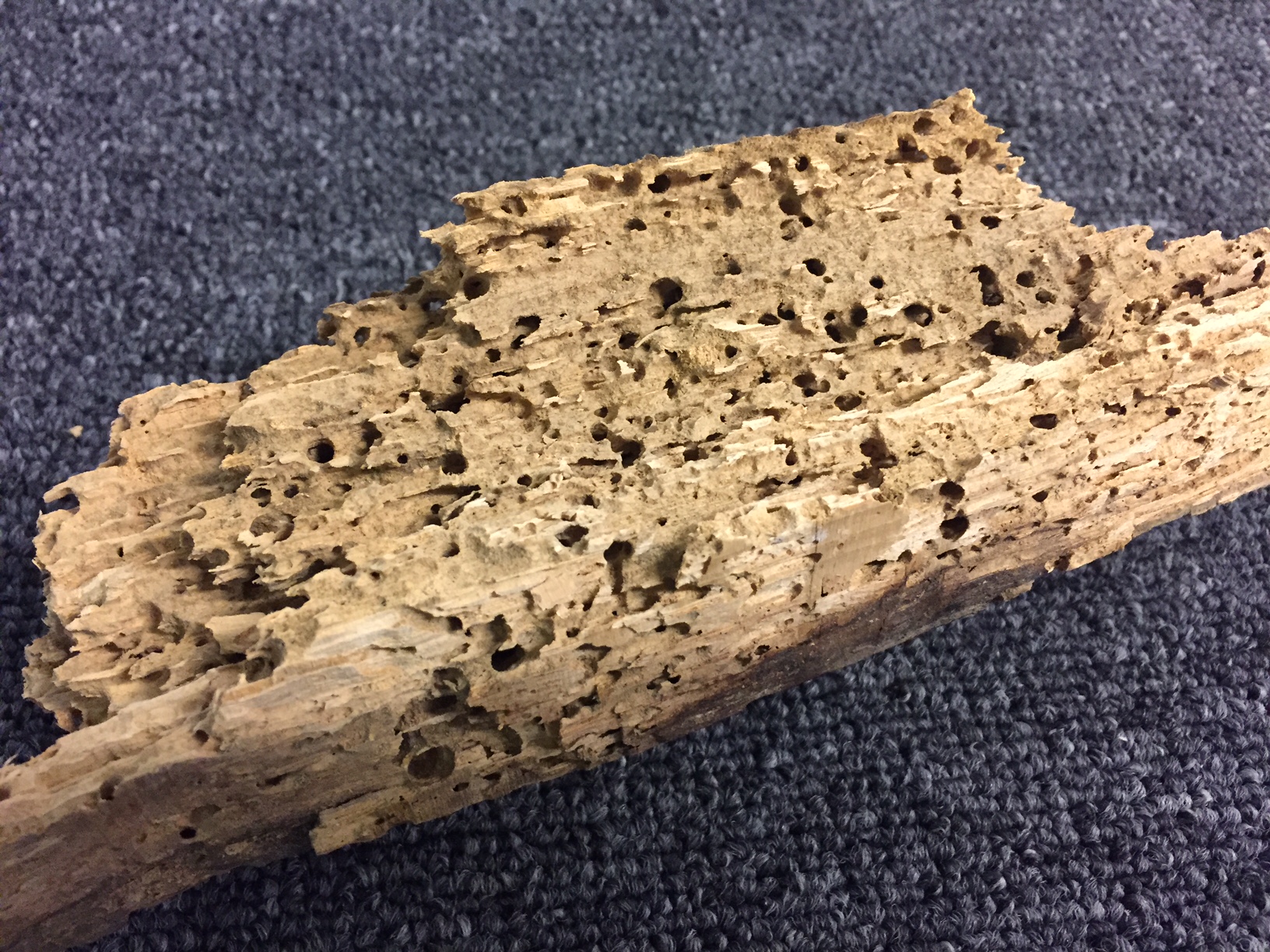 This might look like a piece of driftwood, but it’s actually a chunk of oak beam from a recent woodworm survey in Cambridgeshire that revealed a heavy and long lasting death watch beetle infestation.

Its name comes from the ‘ticking’ mating call it makes at night by knocking it head or jaws against the sides of the tunnels as it bores, which was said in superstition to be counting down the seconds to a person’s demise. When disturbed they often pull in their legs and ‘play dead’.

Death Watch beetle larvae can live in the wood for up to seven years – more than other UK wood boring beetles and they are extensive tunnel builders. Left untreated they can cause very extensive structural damage, mainly to hardwood timbers like oak, elm and chestnut.

You would expect a piece of oak timber like the one pictured to weigh quite a bit, but there is so much damage this piece feels like a piece of balsa wood.

Treatment is carried out using a bespoke permethrin based insecticide that is applied liberally to the exposed timbers and allowed to soak and dry in, effectively creating a long lasting ‘layer’ of tainted wood that stops all life stages – egg, larvae, pupae and adult. We may be able to guarantee treatment through our specialist woodworm treatment division Heritage Timber Care, but we do need to survey.

About Wood Boring Beetles
Wood boring beetles evolved by consuming dead wood in forest habitats, so the grubs typically required the wood to have a reasonable amount of moisture content, and sometimes some decay. In the case of the death watch beetle in particular, a good level of dampness (more than 14%) is required as they feed off the fungus created on damp wood.
Thus a building requiring treatment for woodworm in the structural timbers, may well also have an issue with excess damp, and this needs to be considered during the survey and when deciding on the best way to get rid of woodworm. Some species of wood boring insects, such as the wood boring weevil, are only found in instances where fungal rot has already begun to occur.
Adult wood boring beetles can fly, although woodworm is more likely to be brought into the home through the purchase of second hand furniture, or firewood.

← How about this for a horrendous bed bug infestation?
Proofing In the Drains for Rats – A Job Well Done →