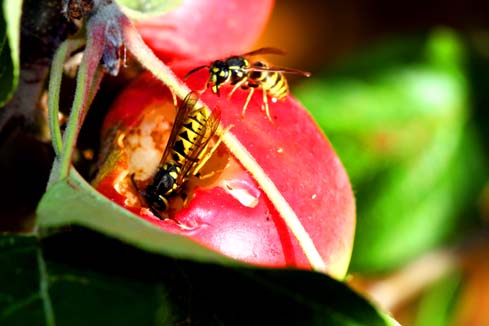 If you have been doing any out-door socialising over the last few days you will probably have noticed wasps appearing and paying rather too much attention to your drinks and food. The life of a wasp colony can be divided into four stages, and their recent appearance in numbers represents a change in behaviour for the workers, who are on the hunt for sugar.

Hibernation
Wasps die off in the winter not because of the cold, but because of a lack of food, with only mated queens over-wintering. Hardly any over-wintering queens actually survive, maybe only one in a thousand, but those that do emerge from hiding when the temperature reaches about 10 degrees Celsius.  It’s a good job for all of us that fifty per cent of wasp queens don’t survive the winter.

Colony Founding
The queen then begins the intensive process of founding a colony. This initially involves thousands of trips to collect wood, which she pulps into a papier-mâché like substance which is used to build her nest. She requires lots of energy to do this in the form of nectar, which is why it’s vital that she does not emerge from hibernation too early.
Even before the nursery (nest) is finished, the queen will start to lay several hundred eggs to build up her brood as quickly as possible. These grubs are fed on insects caught by the queen. Nature is remarkable here, as the grubs convert the insects into free sugar which they feed back to the queen, meaning she no longer needs to keep leaving the nest to find food.

Colony Growth
Once the worker wasps hatch the queen concentrates on egg laying and the workers take on the various daily chores of looking after the nest. Some find wood for nest building, others water for keeping the nest cool, others hunt for insects, others are guards, while others feed the grubs. At this stage of their lifecycle, wasps are doing a good job in getting rid of all manner of insect pests – it’s the next stage when they become a real nuisance.

Propagation
When the queen decides to stop laying eggs and instead decides to begin work on the important business of producing new queens, the behaviour of the worker wasps changes. They are no longer able to feed on the sugar being produced by the grubs, and instead have to go out in search of the sugar they need. This coincides with the fruit maturing on many trees. It is these sugar-hungry worker wasps that bother us when we are trying to enjoy food and drink outdoors in summer.

Wasp Nest Removal
Many thousands of wasps can serve a single queen and commonly their nests are concealed in hard-to-reach places, sometimes underground or in wall cavities in properties or loft spaces.
Wasps react aggressively to being disturbed and can attack in swarms in this situation and are very likely to inflict a painful sting, which can be dangerous to those with allergies. Indeed a sting in the throat can be fatal. Under no circumstances should anyone but a qualified pest controller attempt removal of a wasp nest.
Wasp nest removal should only ever be tackled by an experienced and qualified pest controller who has the right protective clothing and the correct professional strength extermination products. One visit is usually enough to exterminate a wasp nest colony.

The Difference Between Wasps And Hornets?
Hornets are larger than wasps at 20-30cm. Wasps are black and yellow with little hair, whereas hornets are more normally chestnut brown and yellow with some hair. Wasps tend to feast on food waste, fruit and sugary substances and some insects, and can swarm when provoked. Hornets mainly feed on insects and do not swarm. Wasps are quick to sting and can sting repeatedly, and are common in late summer. Hornets usually sting only when provoked and are seen between May and September.

The Pest Professionals are highly experienced in wasp nest removal and also specialise in re-homing bee colonies. If you are having problems with wasps, or any other pests, around your home or business, call 0800 2751000.